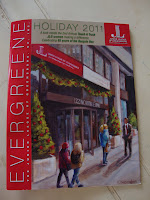 Such a beautiful magazine and I posted it sideways! Sorry!
Have a great day and thank you again!
Posted by Unknown at 9:05 AM 1 comment: 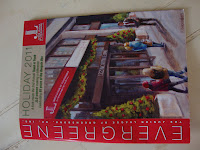 Today started out with a surprise in the mailbox...a beautiful holiday issue of Evergreene Magazine with one of my paintings on the cover! What a wonderful surprise...I quickly opened it and read the article that Marian Cowhig Owen had written. What a beautiful article about my art and the Art with Purpose show! I really am still a child at heart and I enjoyed every squeal of delight that I offered up with the turn of each page.....the magazine has so many wonderful articles and I have learned much about Junior League of Greensboro, as I curled up with the magazine and some pumpkin spice bread and just took it all in! Thank you ladies for all that you do for this community! It has been a pleasure working with you!
The show that was put together by Art with Purpose, "How do you paint Courage?" has just been moved to the next location, Randolph Hospital....I have not been able to see the show yet, but will do my best to drive to Asheboro and take some photos and get them to you! The paintings will be on display at Randolph through the end of the year. Then we will move to Winston Salem. We do now have the addition of Tom Edgerton's painting and we are really excited about this piece being on display for the holidays.
I am looking forward to the next phase of the show which will be the addition of 20 more pieces that will be divided and on display by April. But for now, I think everyone is thinking about family, big meals and the rush of the season....which is as it should be.
Now that Winterlight Gallery has closed and that was my homebase, I am taking some time to step back and look at my priorities for the coming year....this I know....art has to be about more than just painting something for pleasure, or to sell......for me, art has to stir the soul, heal the heart, and bring the Kingdom of God which is Love, Joy and Peace....

Posted by Unknown at 8:27 AM No comments: 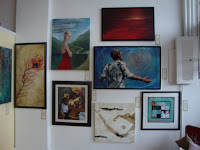 Oh my, the troubles we have when we don't write down the password or the email address! But thank you Karen we are in!!!
There is so much to catch up on so let's get started.....
September and October were amazing months for the show!
We installed the exhibit on September 15th at Circa Gallery in Asheboro.. Mandy Sloan, owner of Circa had invited the press and a wonderful group that set up a healing drum circle. We so enjoyed being included in the circle!
The gallery was beautiful and the show was well received! We had 3 articles written in the local paper and many people came by to see the show.
We were honored to also have several of the paintings on display for the 5K Women's Only Run on Oct. 5th. We added a few more pieces and brought several of the paintings that were directed at Courage in Women. On display was, Cathy's Story by Jean Smith, Moving Forward by Jean Smith, Into the Light by Tom Edgerton, Warrior by Vicki Johnson, I will Dream by Vicki Johnson, Out of the Depths by Kathy Br 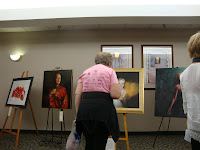 usnighan, Angels of Hope by Connie Logan, Learning to Fly by Alice Bachman, The Runner by Carol Moates, I will Run by Jean Smith and The First Step by Kathy Brusnighan.
This was one of the first challanges to show in two places at once!
It did work out and we were able to move a portion of the paintings to the Cone Hospital for the months of October and November....
Posted by Unknown at 11:18 AM No comments: