Mandy Sloan of Circa Gallery just posted the invitation to the opening, and she added to my basic layout of the card! Looks great!
I think that all of us that have taken this journey can say a huge thank you to
Mandy! From the beginning, she has given me her time and her suggestions to make this show a success. I have to say that as a gallery owner, she is so willing to get involved with the artists that are represented in the gallery and support in every way that she can!
If you have never been to Circa Gallery in Asheboro, you are in for a treat when you step through the door! Not only does she have beautiful art on the walls, pottery on the tables, and unique handmade objects, but as you walk through the gallery, you are drawn into the busy back half of the area. There you will find classes, a frame shop and friends that are ready to chat and spend some time with you. I think Mandy has found a great way to make Circa work on a daily basis, with several price points to draw you in. This seems to keep the traffic coming in while building relationships. And isn't that what it is all

about? I have read that most people love to know something about the artist, about the piece they are considering and that happens at Circa..plus the fear of walking into a gallery is wisked away by the small town atmosphere that reminds me of my childhood. So, if you are in the area, please go by and meet Mandy and the girls. They are worth the trip!
Circa Gallery
150 Sunset Dr.
Asheboro, NC
Posted by Unknown at 1:48 PM 1 comment: 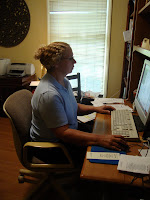 So glad that yesterday came and is now behind us! The crew showed up and began to make lists, revise statements, cut mat board, photograph art, and in general, bring order to the many facets of the last 6 months of phone calls, emails and decisions. Wow, what an amazing team thatpulled the world of one exhibit together!
Jean Smith spent hours, setting up templates and putting the artist's statements together. We were both thankful that some of the work was already done and the finishing touches were left for this day of last drafts!
Thank goodness for one in the bunch that knows how to manipulate the programs on the computer! I think we might all need some lessons after this is all over!
Phyllis Sharpe spent the day preparing all of the statements and cutting the final copies, preparing them to be mounted on the matt board. Of course, she wasn't alone, as little Fanci was sitting right behind her keeping an eye on the progress. My little Molly slept through the whole thing and was not much company to Fanci...in fact, I don't think they even 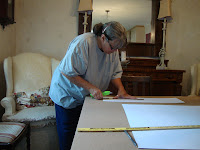 crossed paths the entire day!
Vicki Johnson was here in charge of all of the measuring and cutting of those tiny little mat boards to mount the statements on. She did a stellar job and they are all perfect. Not bad, now that I know she needed more tools than she had, but she made it work and I am so grateful!
Thank you Ladies, for pouring yourselves into this project! I know it is going to be a success! 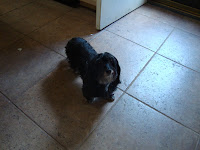 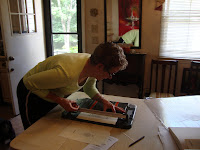 With only a few days to go, I am surprised at how calm I am....I am not sure if I am in total denial or really resting in the goodness of the Father and trusting that He has this all in His Hands...I would hope it would be the latter of the two....All of the pieces are not here yet, and the statements that are to be typed and ready to go with each piece are still on my computer, waiting for me to figure this program out...Thank goodness for friends that have been downloading their understanding of the amazing computer into my understanding! I am so very spoiled to have an amazing husband that I can depend on to bail me out if I "lose" something or hit the wrong button!
Jean Smith has spent an entire afternoon proving to me that photoshop is more than cropping and enhancing...Karen Fridy has taken a morning to lay this blog out and get me settled enough to at least post! Ha! I have a new respect for all of the beautiful blogs that seems to flow with color, interest and so many columns! Bravo to each of you that spend endless hours learning how to tame the world of networking! I just want to paint! but I am learning that this seems to be inevitable whether I like it or not.

I am working on creating a postcard for the show with this wonderful program that I did not even know I had! It is called "Pages" and the templates are wonderful and seem to make this almost painless.......

Today was a day to work on paperwork and help one of the artists that will be participating in the show with experimenting. Experimenting is always fun and we come away better and wiser. Such is life....One of the artists in the show, Phyllis Sharpe, is trying a new technique that has been fascinating....she has painted two paintings that are called saturated watercolors. She is now mounting the watercolor papers on canvas, and going to seal the works with varnish and cold wax. She will not have to cover the watercolors with glass, but will be able to hang them as an acrylic or oil painting. She has worked so very hard and has been so willing to risk in order to grow in her skill level. I am so proud of her! I have included a photo of one of her pieces. It is called "Stillness". The photo does not really show the subtle changes and motion that you can see in her painting....It make me feel as though I am under water and swimming to the top, about to break through the surface....what do you see?

We are still looking for a venue for April and July and I am sure we will have them in place soon!
I am so excited about where we are heading! I know it is going to be so worth all of the effort.
I now have about half of the pieces here, waiting to be sealed up and ready to travel...we will get the paper work in place first of the week.....what a wonderful team I have...isn't it great that we
get to walk through this life with friends!?